Glamorous hall on the ground floor, refurbished in 2011, decorated with Renaissance plasters and oak floor, suitable for formal meals. Occasionally used for dancing, as long as the Ball Hall is still under the renovation.

A large hall which got back its original Renaissance size and paintings during 2012-2014 reconstruction works, at the expense of Baroque style dividing wall and plasters. The dining furniture bought in Belgium, 2015-2016, provide with a possibility to organize meals for up to 48 people in sitting arrangement.

Enormous Baroque hall, extending from entry doors- Renaissance portal, surrounded by doors leading to the reception rooms on the ground floor and, through monumental Baroque stairs, to the first floor. After the reconstruction, held 2011-2014, the Grand Entry Hall is now the venue for exhibitions and cocktails. There is a smoking area there, the only one in the castle. The epitaphium from 1565, restored 2011-2012, featuring former owners of the castle, the man from von Kottwitz family and the lady from von Tschammer family, comprises the most precious element of this hall.


Once a beautiful reception room, decorated with Renaissance plasters at the entire ceiling. Long and costly works, conducted with financial assistance of the Ministry of Culture and National Heritage, resulted in bringing back the construction features of the hall in 2013, followed by complex works on the plasters themselves. The plasters are missing around 12 percent of decoration, which needs to be replaced and coordinated with original plasters. Also the walls and the floor need further works. The hall most likely served as a chapel in Reformation period. The central plaster decoration is devoted to the Resurrection.


Carefully restored, with historical features, this kitchen is full of character but equipped in a modern way and is suitable for preparing meals for up to fifty people. It is conveniently situated on the ground floor, next to the main reception rooms.


Very large bedroom, equipped with ancient furniture including piano, queen size bed and two beds for children, with a view on the pond, has got a large bathroom, and is close to the kitchenette.


Probably the oldest room in the castle, the favorite place of the owner, equipped with a complete nineteenth century bedroom furniture from Belgium, including a double bed. It has a view on the pond, an extendable large couch allowing additional guests to sleep, and a small bathroom with shower. It is close to the kitchenette and the inner yard.

Small bedroom equipped with cozy, ancient furniture, including single bed, 108 cm width. It is very bright, with widows facing the moat and the tower. It has a small bathroom with shower and it is close to the kitchenette and the inner yard.


Huge apartment of ninety square meters on the second floor, equipped with a fire place, large bathroom and four separate sleeping annexes: two with double beds and two with single beds (Biedermayer, 108 cm width, 190 cm length). Ideal for a group of friends or a large family. Operational in warm part of the year (heated by fire place only).

The Library
Situated on the first floor, under the ceiling decorated with Renaissance paintings, it is a place for thousands of books, printed in Polish, German, French and English since eighteenth century till present times. It reflects the fields the owner and his family are interested in, means history, history of arts, music, strategic studies, European integration, security policy, literature, medicine, philosophy, geography and sports. A far as philosophy is concerned, there are some gifts from National Library in Warsaw and Warsaw University Library. The hall still needs a lot of work but it is definitely nice to read while enjoying the views on the park and the inner yard. 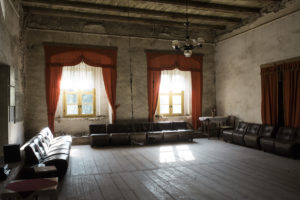 This sitting room is meant to remind the Polish gentry manors in Eastern Europe, not very formal, equipped gradually, generation after generation. There will be a piano surrounded by comfortable chairs and armchairs. The Sitting Room, with coffee and tea service, is adjacent to future guest rooms on the first floor.

The Pantry
Mid-size room with vaulted ceiling that needs rebuilding. After renovation it will accommodate regional food products, local wines and herbs. It is situated on the ground floor, next to the Castle Kitchen and Dining Room.